Engineered Artworks created a large-scale fabricated steel version of a wooden toy fire truck for Fire Station 32. Inspired by historic fire trucks of the late 1920s and 1930s, “Engine 32 ½” has been modeled after the original Engine 32 that Captain Steve Sanislo operated out of this station for many years… a 1924 Seagrave Apparatus. “Engine 32 ½” is a custom designed and fabricated idealized version of a real vintage fire truck built to ½ scale with a toy-makers detailed aesthetic… endowing it with a sense of play, whimsy and imagination. The ladders of “Engine 32 ½” extend, stretch and come alive behind the apparatus, organically and impossibly creeping across the outer wall of the firehouse. The extension of the ladders behind the truck represents the speed and urgency of the Fire Fighter’s mission. The overall shape of the ladders emulate a chaotic abstract flame. Fire is one of the most important elements to man and a catalyst for many aspects of creation, and it is also one of nature’s most destructive forces.

Designed to inspire and reflect the surrounding community, this piece acts as a nod to West Seattle fire fighters of the past, and an inspiration to the future fire fighters of tomorrow. The location I have chosen is highly visible to the surrounding community and acts as an intriguing point of interest that will draw people in from Alaska Street as they walk or drive past the station. The headlights of the truck are fully operational, lighting the main entrance-way for nighttime visits to the Fire House.

Fire Station 32 plays a critical role within West Seattle, with long-standing connections in the local community. It’s heritage can be traced back to 1914, and with strong ties to the neighborhood in which it serves, the men and women of 32 tirelessly hold vigil night and day.

One of the things that struck me the most when I walked into the Fire Station 32 for the first time were the hand carved wooden toy trucks. They were on display in the Watch Office, gifted to the fire station by a member of the West Seattle community. I immediately began to reminisce about the countless fire truck toys that I’ve played with as a young boy, flashing back to memories of zooming to the rescue of the helpless and the hurt… putting myself in harms way to save a damsel in distress. After some research and with the help of Michael Mann, a Paramedic working out of Fire Station 32, we tracked down the daughter of Frank Keller, the man who made those fire truck toys. I called up Francine Keller (Frank’s daughter) and she gave me a brief account of Frank and their family. Frank Keller was a West Seattle resident living just up the hill from Fire Station 32 on 37th Street. He was 90 years old and has lived in West Seattle since the 1960s. Mr. Keller worked as a Lobbyist for a living and was at one time, a Democratic State Chairman in the 1960s. He also made toys as a hobby for his children and grandchildren and over the years, has gifted fire truck toys to many fire stations around West Seattle. Mr. Keller’s wife Joanne Keller used to visit the fire station regularly to get her blood pressure checked. She died in 2008 at the age of 69. Frank Keller passed away on December 18, 2017, at the age of 93. There are 7 Keller children and 8 grandchildren. 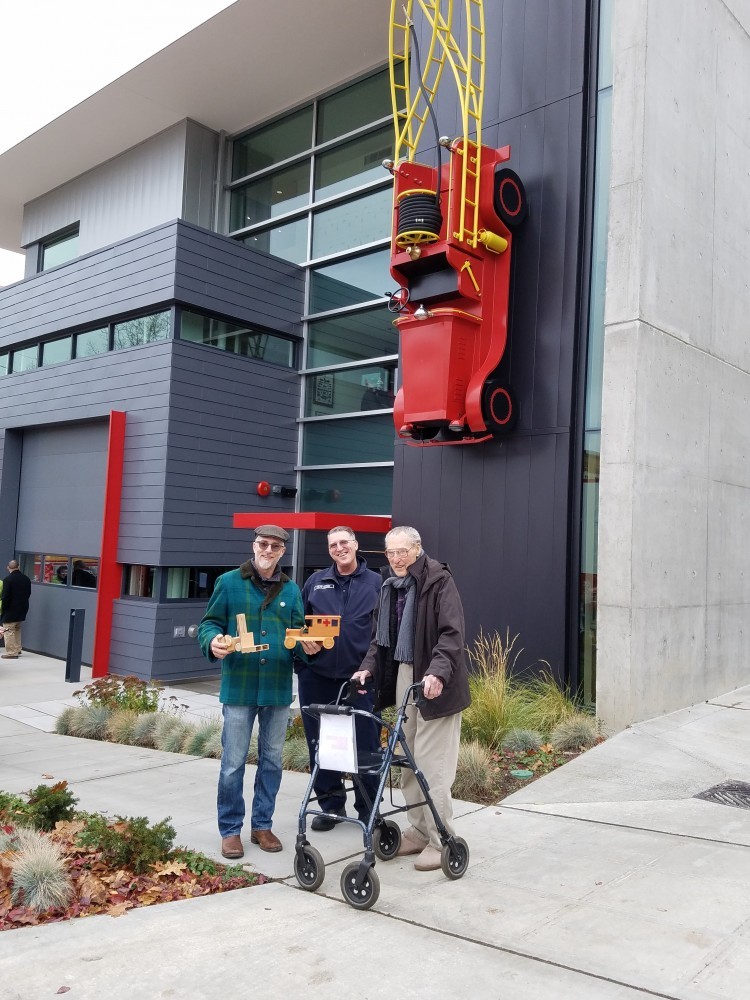